In December of 2006, I got what turned out to be a fairly serious spinal injury while studying shorin ryu karate and aiki jujitsu. It put some stark limits on my athletic habits, and changed everything – it also made me extremely conscious of cherishing and focusing on what the body CAN do, even when there are structural issues.

The injury disintegrated completely in 2016, and in March of 2017 I had to have my lumbar spine essentially rebuilt. The amazing Jeffrey Arle of Beth Israel Deaconess Medical Center in Boston gave me the million to one shot at just about perfect nerve function none of us thought I could have – I took that shot and ran with it, rehabbing two hours a day and setting big goals to inspire me through the difficulty of the rehab. It worked. 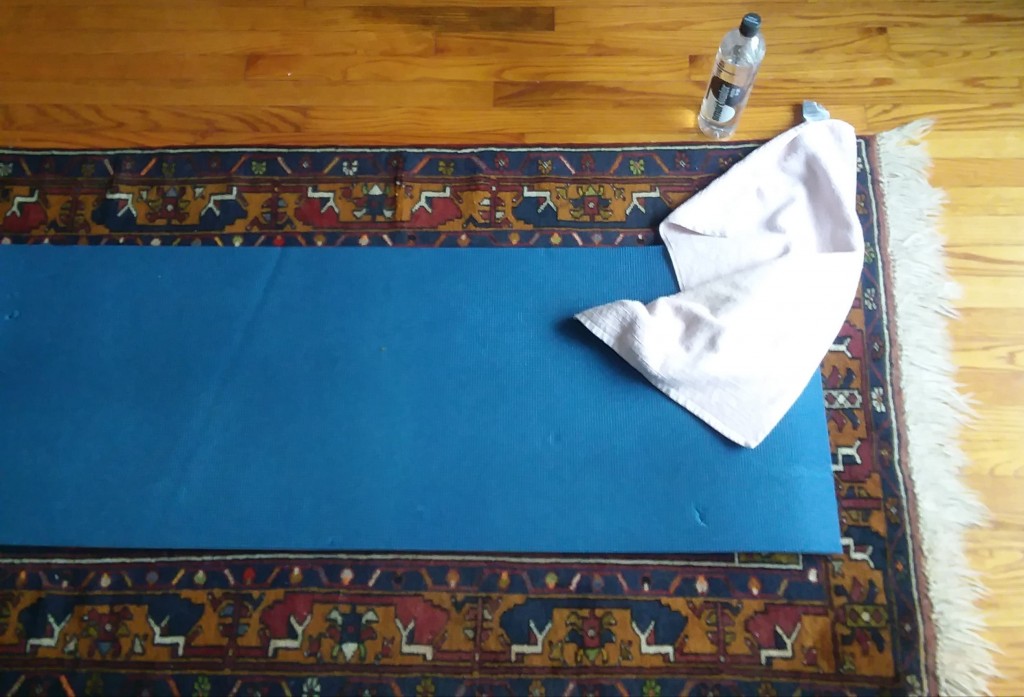 These days, I have somehow become “That Guy” – the one who knocks out pretty intense core workouts and makes it look easy. Deceptive! It took a lot to get there, and takes a lot to keep very strong around the metal. There’s been great joy and accomplishment, though, in breaking every “impossible” PT’s have said I faced, with sheer stubborn dedication – and a ton of happiness in recently building a small but dedicated and supportive fitness community for all bodies and all abilities, where I try to share my experience and learn new things. If I had time for more careers, I’d love to coach athletes with disabilities: eating the impossible for breakfast is actually a pretty good way of life (and the water in particular a literally supportive environment).

I’ve also taken up recreational distance cycling in the last couple of years, and begun to do half centuries on my beloved Cannondale hybrid, IgGy Stardust (named for the IgG I take to keep my wonky immune system working properly, and of course, David Bowie’s greatest phase) - 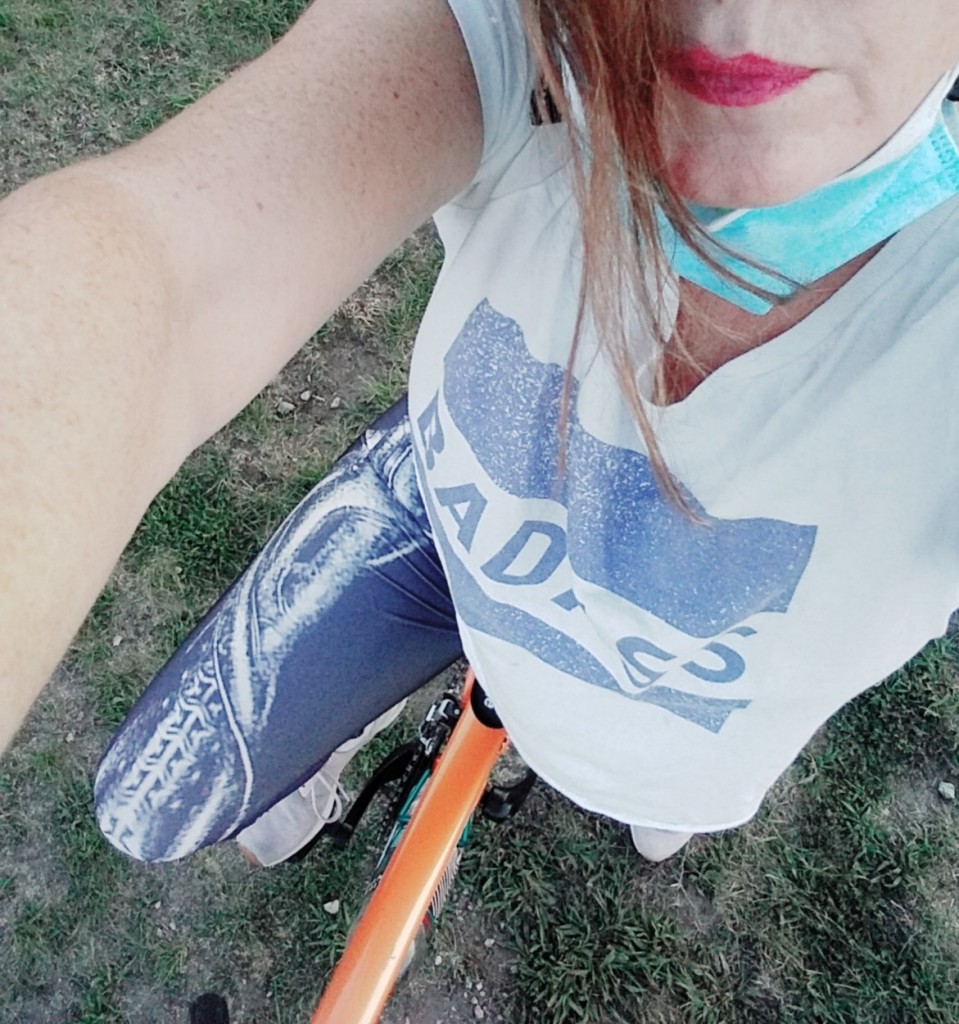 Hoping to work my way up to some long distance trips -

but really, I just like to ride my bike. 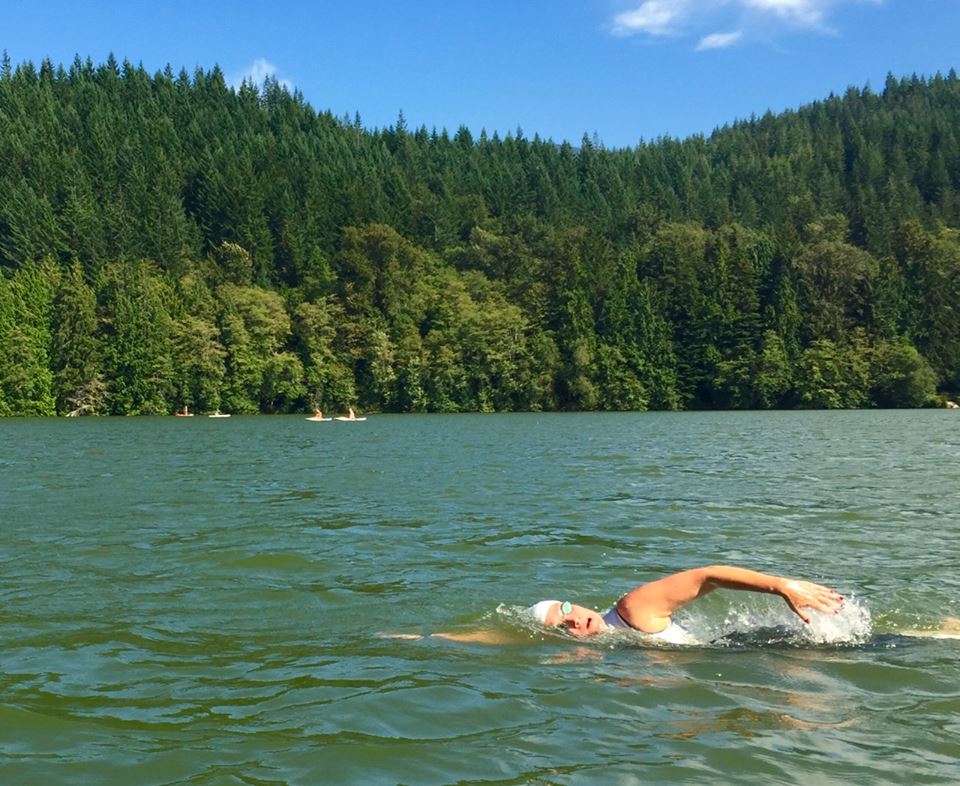 The water is my true home, though, and where I can set and achieve the big goals.

In August of 2018, seventeen months after having my back renovated in shades of titanium and screws, I swam the Skaha Ultra Distance 11.8K race in Penticton, British Columbia.

It was the culmination of my initial post-surgical rehab, and the first long distance swim I’d ever tried, accompanied by my kayak-support extraordinaire: Kai Chang. I had such great support from so many to pull this off – we made Team Frankenspine, and there is absolutely no way I could have done this without their extraordinary buoyancy. 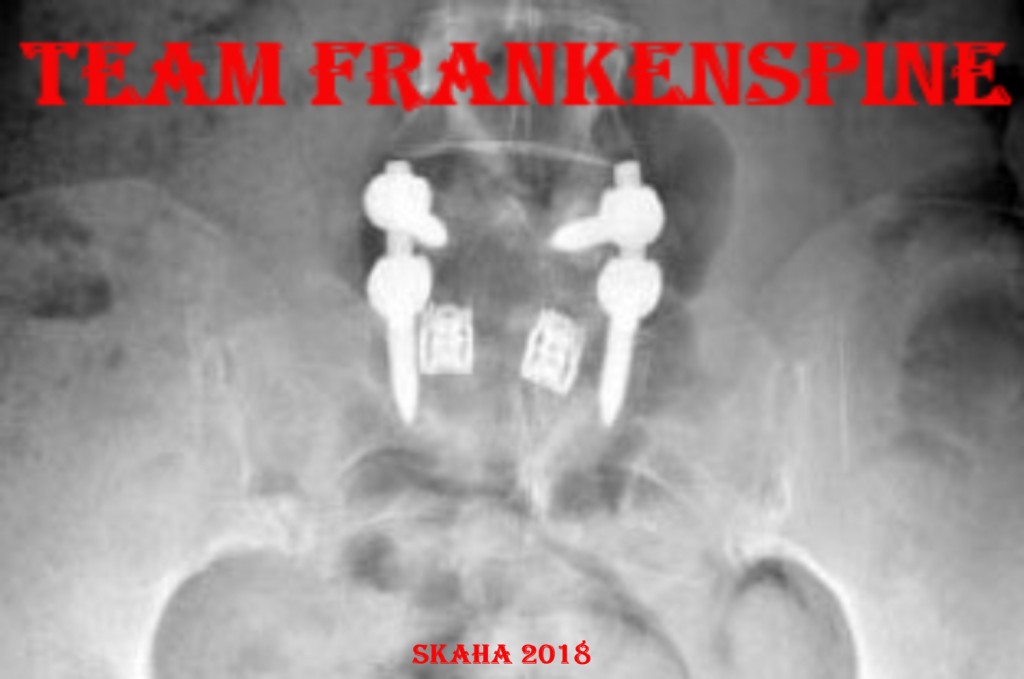 My dear friend Lori made this t-shirt logo, and it was more right than she even knew, ha! 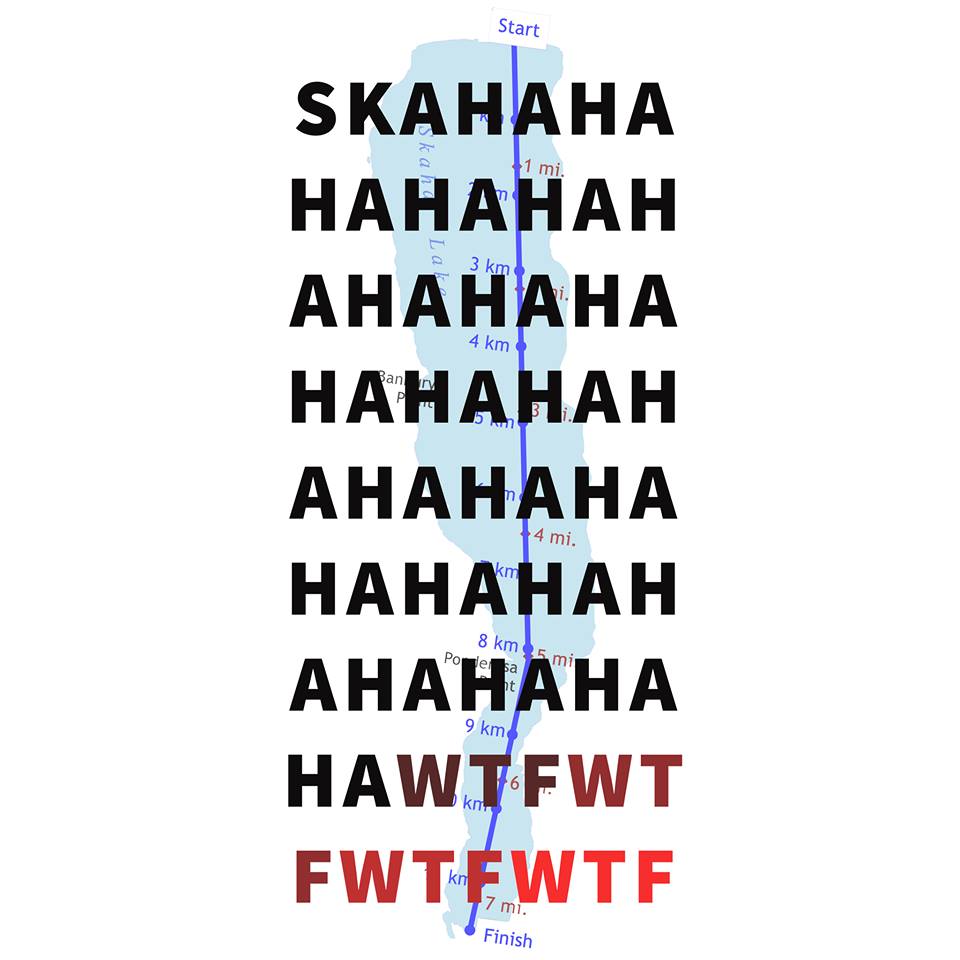 An endurance swimmer was born, training for that event – and being coached toward it by the extraordinary Kim Bierwert. He made me a much better animal, by finding how the water loves me and how I love it back, then amplifying that: I’m so grateful to him.

The first 6 miles were all fearless power and joy. The last two or so are best not discussed, but I made it, ha.

I plan to swim the Strait of Messina (between Scylla & Charybdis) next, because obviously: a Classics prof who survived spine surgery closely followed by immune collapse and then covid kind of has to, doesn’t she?

The Strait of Gibraltar is the big dream, but we’ll have to see.

I’m no Sarah Thomas, but I found a great passion, for sure. 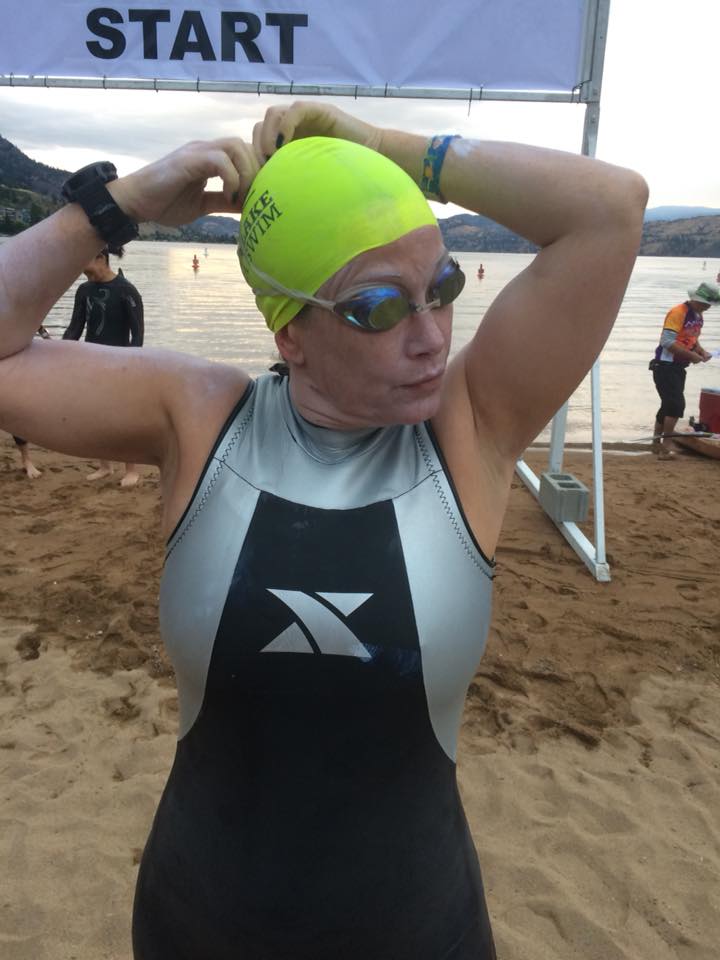 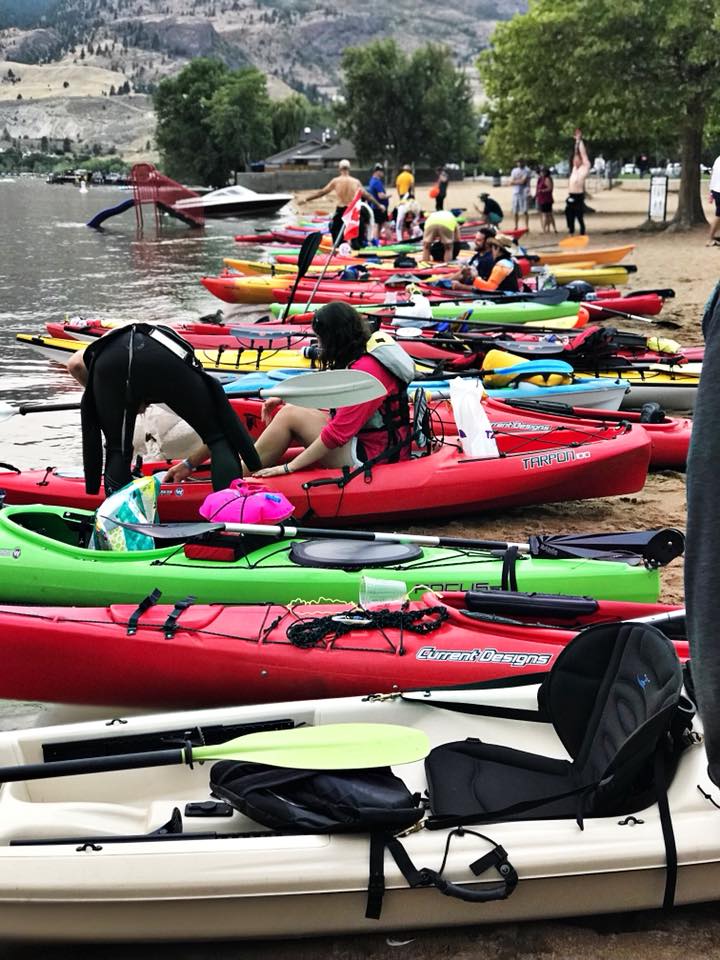 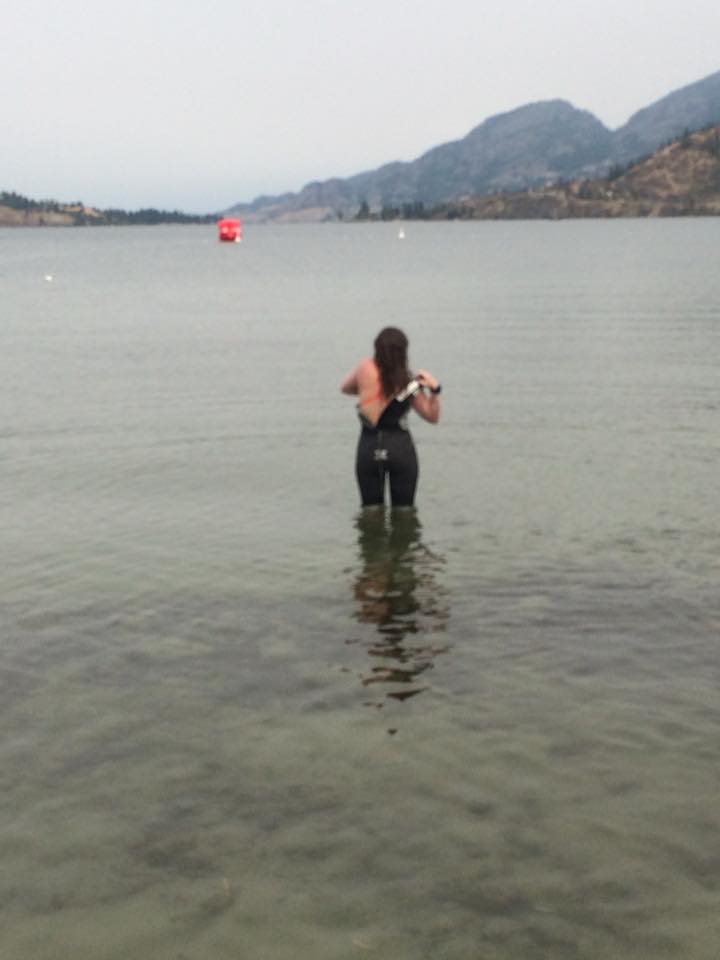 Before that, in September of 2017, just six months after spinal surgery, I swam the Boston Sharkfest mile race in Boston Harbor.

Still liquid-ish in bone grafts, this was terrifying – possibly insane – and TRIUMPHANT.

I needed to know I could still be myself.

I found that I can. 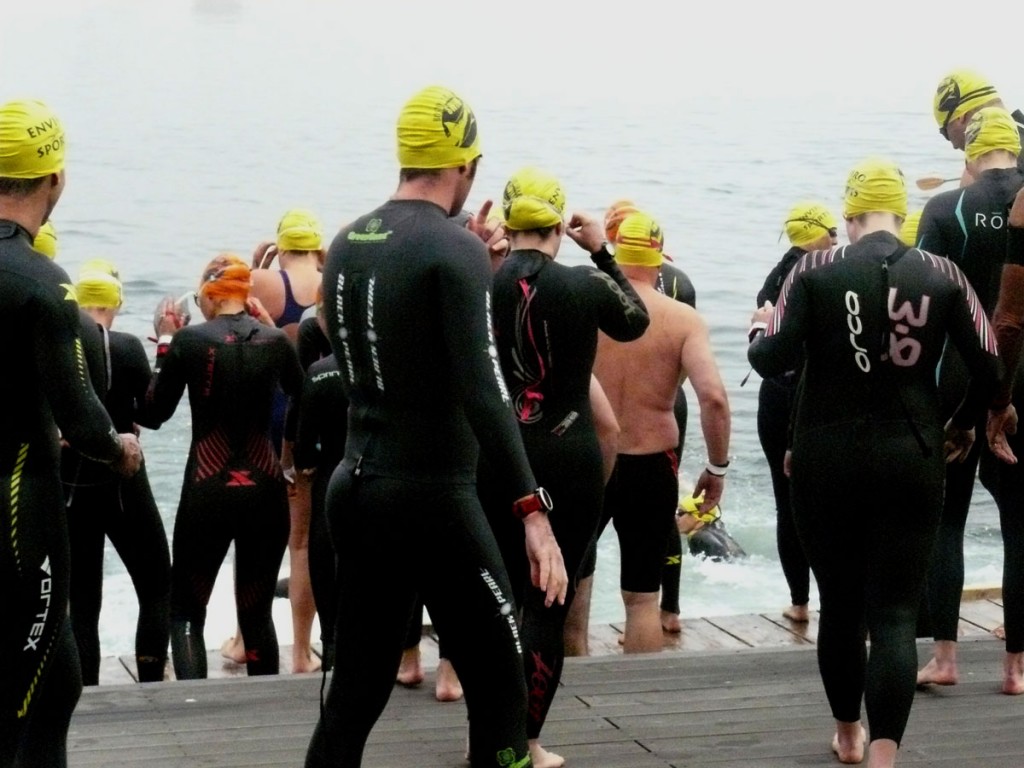 I couldn’t actually jump yet, so I had to get in via ladder. Luckily there was one: 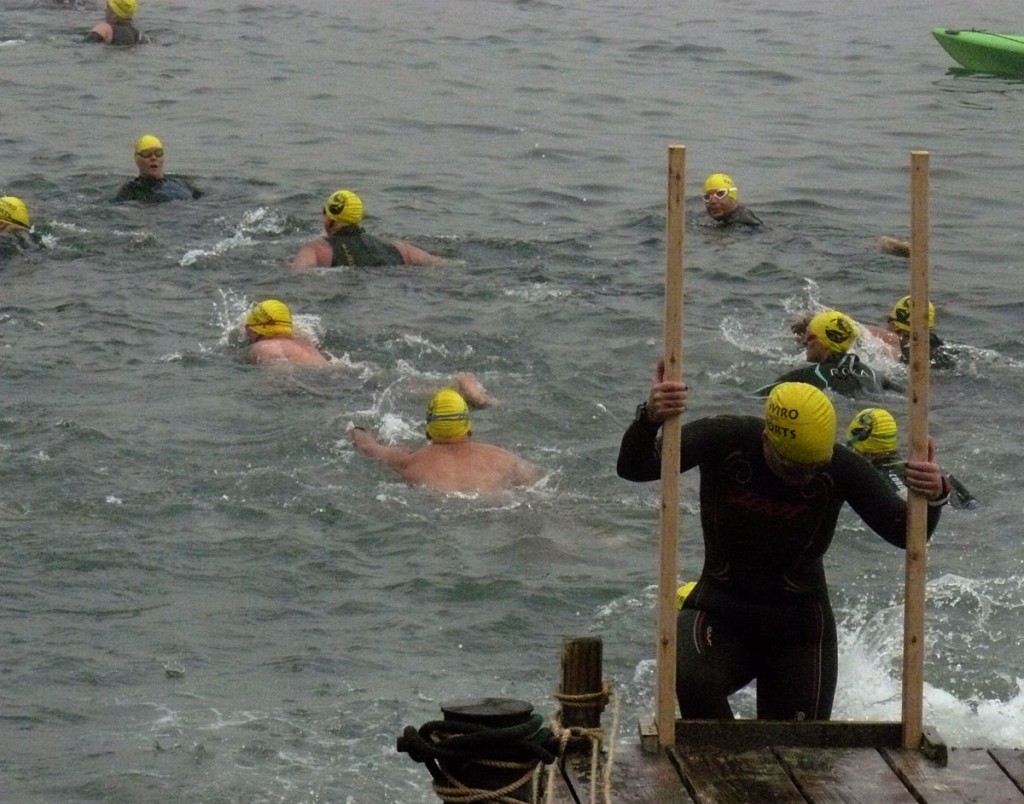 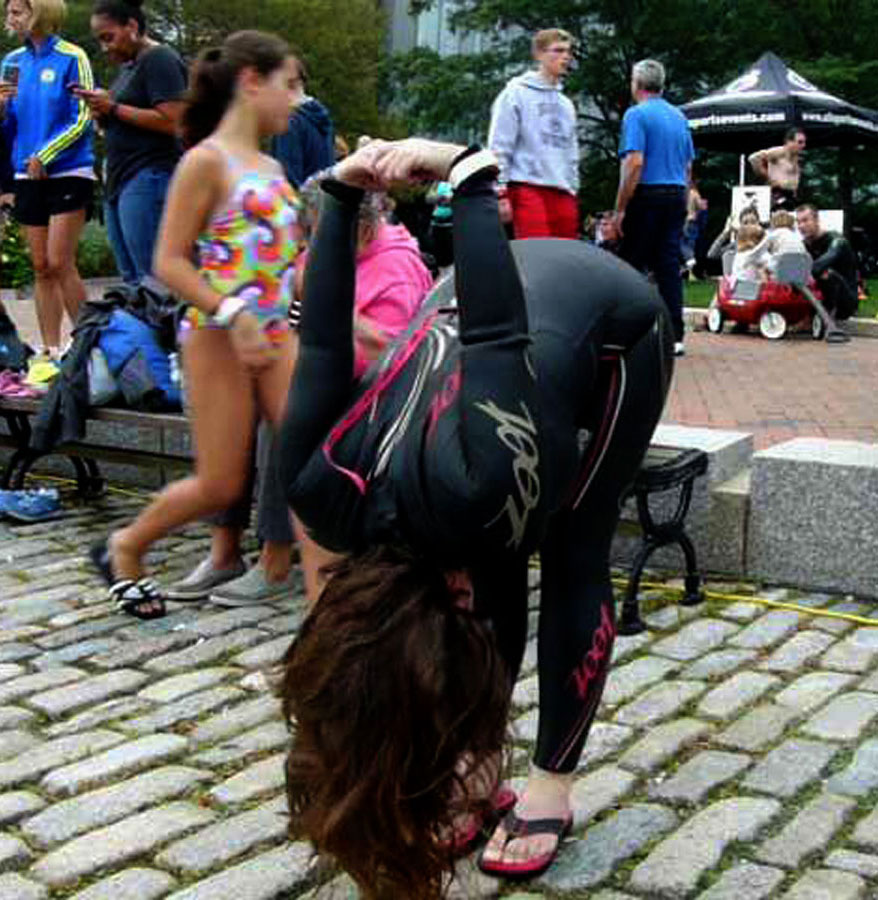 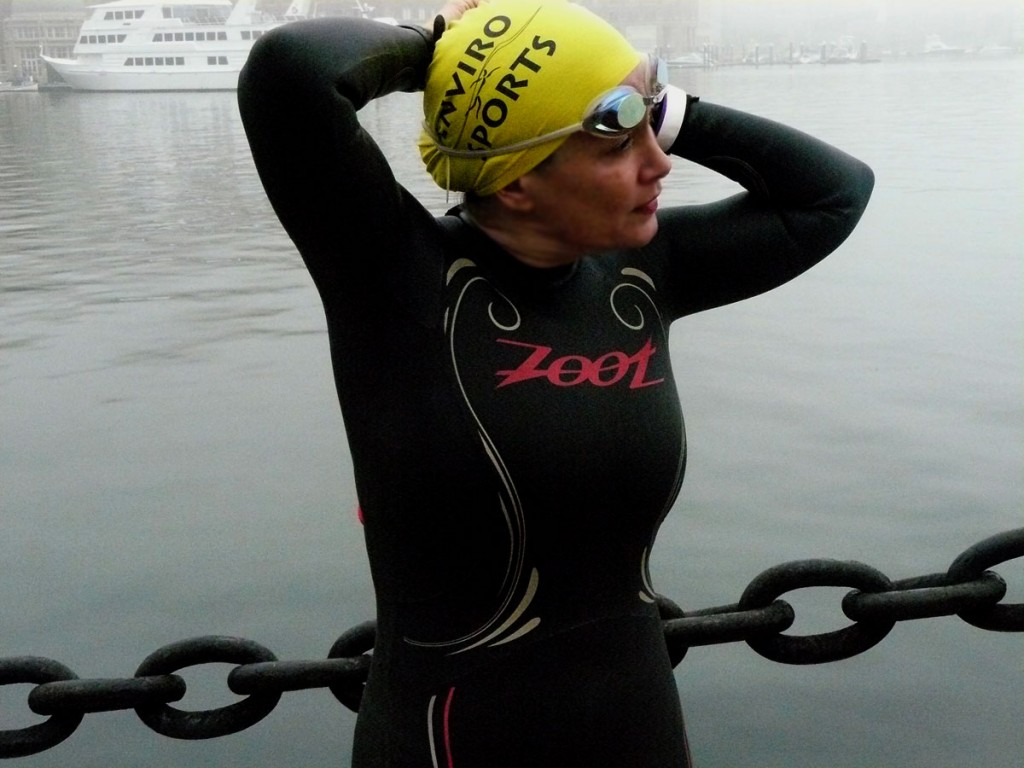 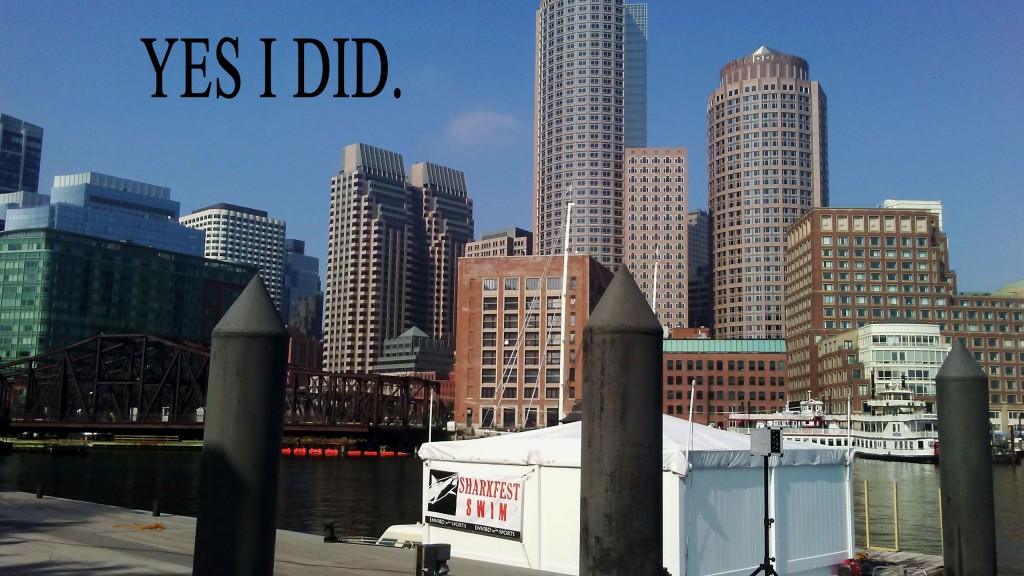 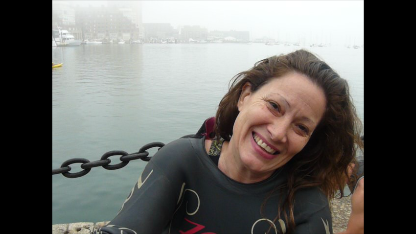 Prior to surgery I had some limitations that were greatly assisted by excellent Canadian physiotherapy – I’d lose all feeling in my legs and just keep swimming until it came back, that kind of thing – but the Squamish Titans Master’s Swim Team helped me forget anything but joy in Alice Lake and Brennan Park’s pool, as well as at swim meets in Vancouver.

What a glorious team, time, and place. (I miss you, Titans!) 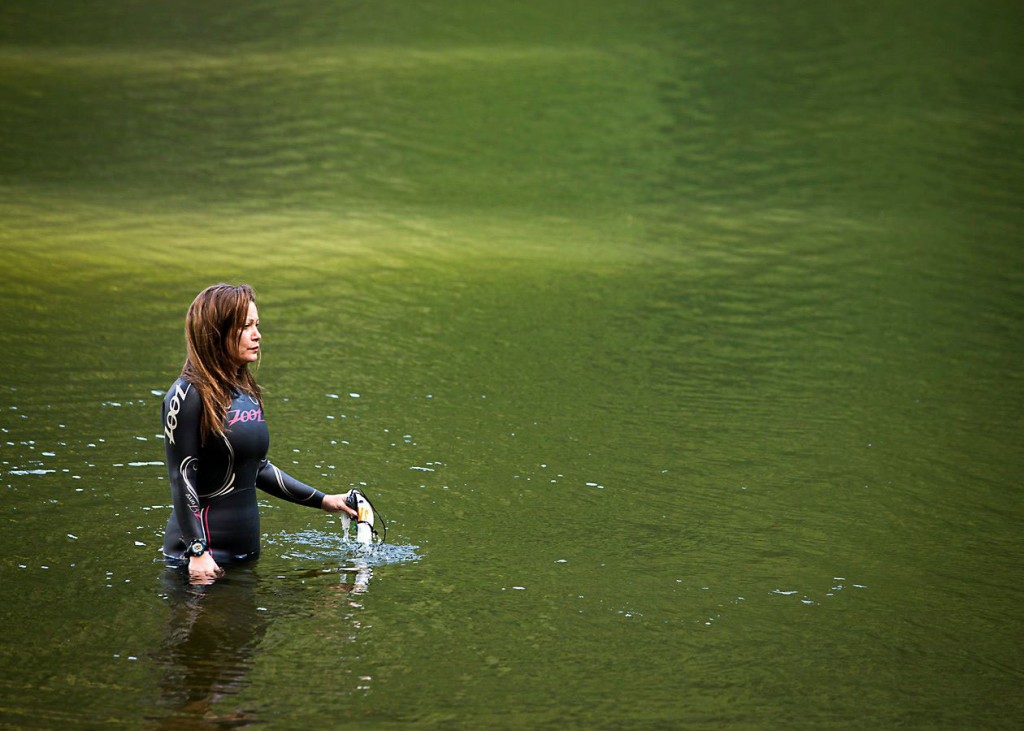 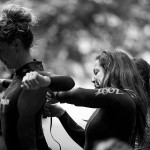 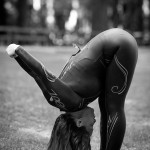 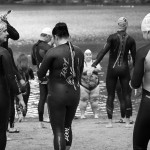 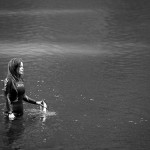 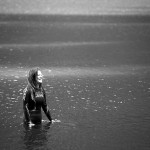 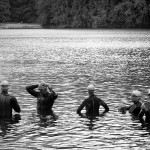 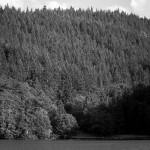 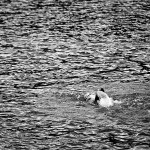 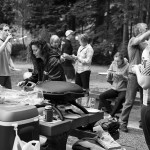 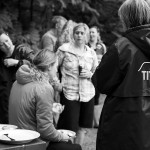 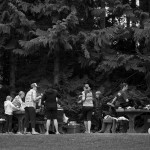 (24:56 open water mile that day! I was happy to break 25, particularly since it was all arms at that time.) 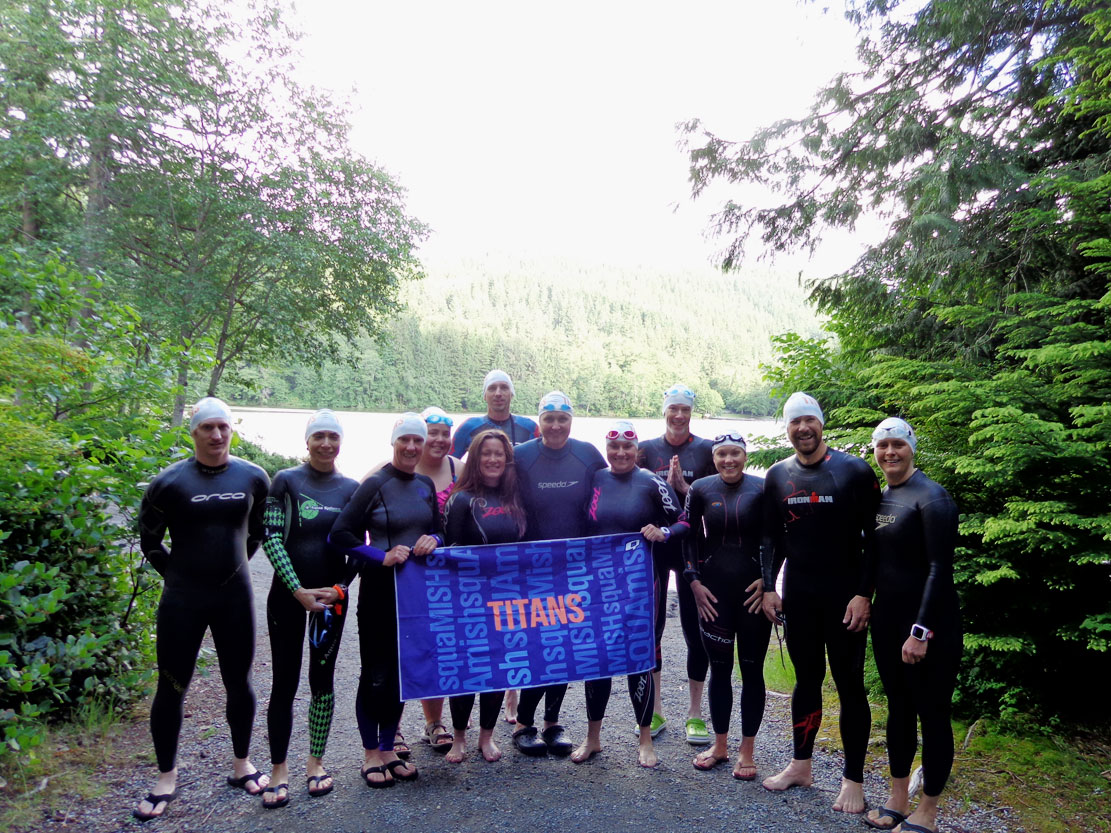 Whatever the Titans did, we always did it strong - 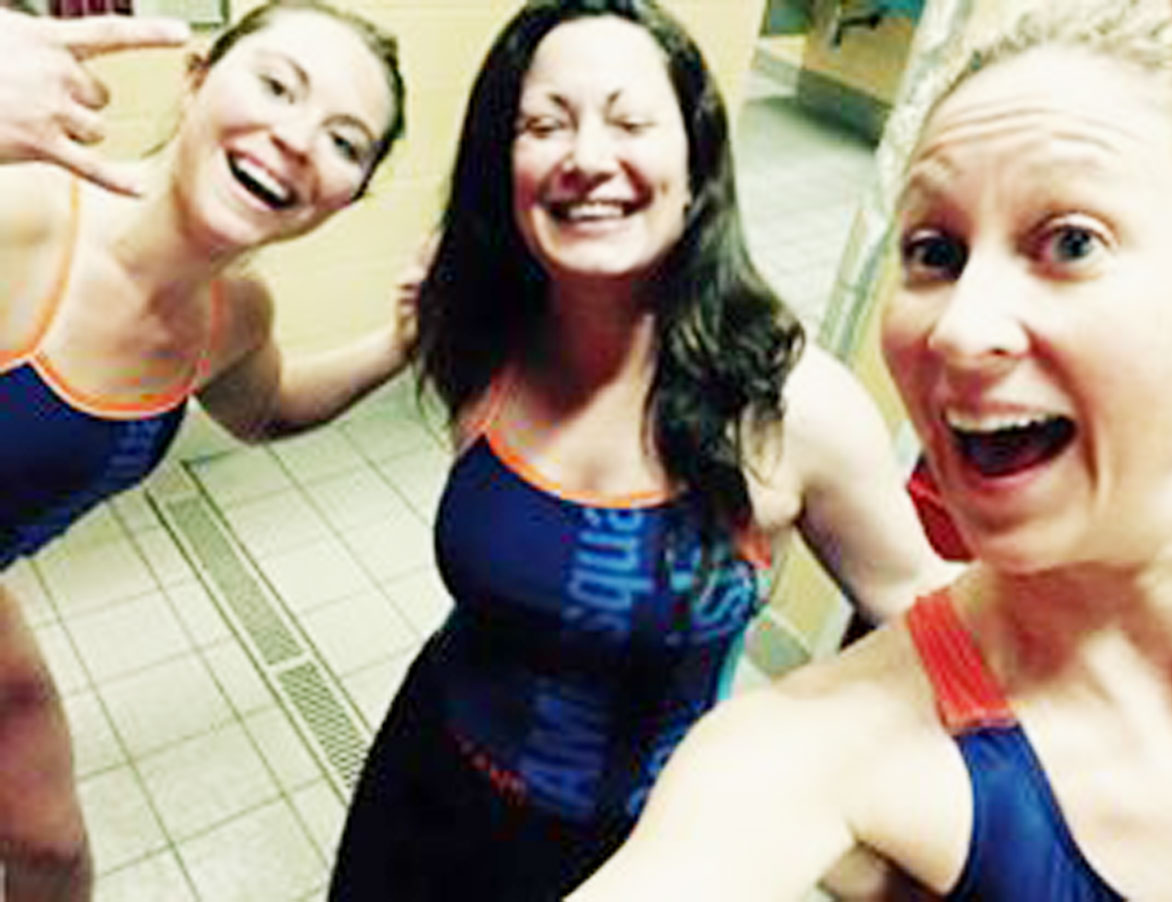 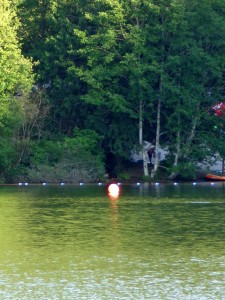 One thought on “Swim. Bike. Thrive.”